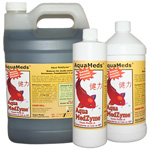 Aqua MedZyme permanently reduces ALL strains of deadly ulcer causing Aeromonas, Pseudomonas in your pond by starving them to death. These deadly bacteria live in every koi fish pond, causing life threatening bacterial infections such as ulcers, fin rot, tail rot and more. Attacking koi when they are stressed, causing thousands of fish deaths each year. Aqua MedZyme contains 760,000,000 yes, seven hundred and sixty million hungry beneficial bacteria per ml that eat the same food as Aeromonas, Pseudomonas, which starves them to levels so low they can not harm your fish. 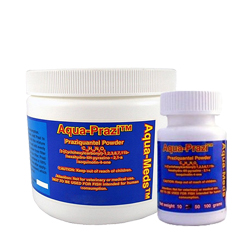 Aqua Prazi is one of the safest most effective medications on the market for treating deadly flukes; it does not stress your pond fish or set back your filter. Plus, Aqua Prazi is an excellent treatment for tape worms in goldfish, koi and pond fish. We suggest treating with Aqua Prazi every spring to get your pond fish off to a great season and again in the fall before their long winter's nap. Plus, treat all your new fish, very important! 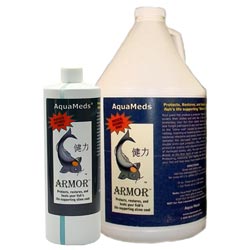 Aqua Meds ARMOR is an excellent product to use if the slime coat of your fish has been damaged caused by abrasions from rocks, netting, injecting or breeding activity. Helps protect the slime coat by forming a synthetic slime coat until the fish is able to rebuild its own. Fast acting protective coating with vitamin E promotes the healing of damaged scales, skin, fins and reduces stress. 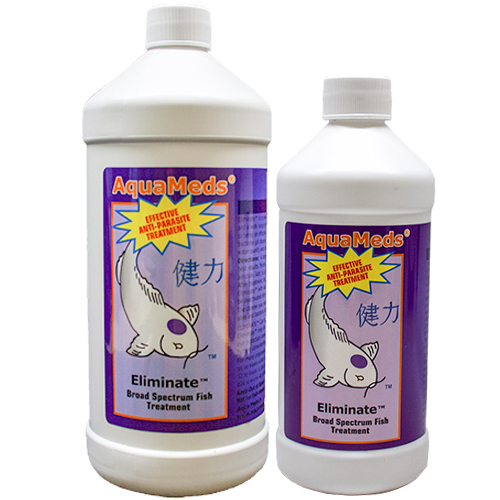 Eliminate is a powerful broad spectrum fish treatment; acting against fungus, bacteria and a wide range of parasites including Chilodonella, Costia and Trichodina. In addition to being an effective anti-parasite treatment, pottassium permanganate can help with bacterial gill disease and skin ulcers. It will also oxidize organic matter and improve water quality and clarity. Directions: A large water change of 25% or more before treatment. Bypass biological filtration, turn off UV and increase circulation/aeration. Add 16 oz. to every 6,000 gallons of pond water. After treatment, the pond will have a pink hue for 4 hours. Eliminate may stain everything it comes it contact with. Gloves and eye protection should be worn. 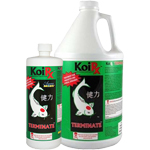 Aqua MedZyme Dry reduces the deadly bacteria in your pond by starving them to death. These deadly bacteria live in every koi fish pond, causing life threatening bacterial infections attacking koi when they are stressed, causing thousands of fish deaths each year. Aqua MedZyme Dry consumes the same food thatAeromonas, Pseudsomonas live on and starves them to numbers so low they become harmless to your koi & pond fish.